葉天士 Ye Gui Tianshi (1667-1747) was a medical scientist whose expertise is revered by medical students and professionals around the world even today.  Modern Chinese Medicine doctors and scholars still use his work in dealing with the outbreak of Seasonal Febrile Disease, and most recently the SARS outbreak that occurred a few years ago as well as the COVID-19 epidemic.

He was born into a family of famously skilled physicians residing in the Jiangsu Province, one of the cultural and economic centers of China at the time. Both his grandfather and father were respected local doctors.

葉天士 Ye Gui lived during the Qing Dynasty (1644-1912) under the rule of the Emperor Kangxi. The Qing Dynasty was the last imperial dynasty of China and its later period is responsible for the integration of Traditional Chinese Medicine and Western Medicine.

At an early age 葉天士 Ye Tianshi expressed interest in medical science and studied under his father. When 葉天士 Ye Gui was just 14 years old his father passed away. That however, did not stop the young man from learning and practicing medicine under one of his father’s students, Dr. Zhu. He quickly proved to be a diligent and avid student.

葉天士 Ye Gui studied under seventeen different masters in his lifetime and read any medical texts he was able to get his hands on. He was an expert on ancient herbal prescriptions and when he heard of a highly skilled person, he usually pursued them in order to learn their particular skill.

During 葉天士 Ye Tianshi’s career he had one “incurable” patient.  He found that the patient had recovered within a year.  Surprised, he asked the patient how he had been cured?  The patient responded that a monk had cured his disease.  葉天士 Ye Tianshi set out to learn all he could from this monk.

He changed his name so that the monk would not recognize him.  He did many chores, such as carrying water, getting firewood, cooking, and cleaning as he acted like a young apprentice.  The old monk was impressed.

A few years passed and the monk told 葉天士 Ye Tianshi, “You have learned all of my techniques and your performance is now superior to the famous doctor Ye Tianshi.”

葉天士 Ye Tianshi’s kneeled down and kowtowed to the old monk and admitted that he was Ye Tianshi. The old monk was very moved by Dr. Ye’s behavior and taught him all that he knew.

葉天士 Ye Tianshi became highly proficient in a number of subjects from principles to treatment and diagnosis to formula composition. He was considered a modernizer, who introduced new methods of diagnosing and treating febrile disorders at a time when epidemics were a major threat to public health.

葉天士 Ye Gui was a proponent of mild acting herbal formulas and low dosages. He is known for keeping an open mind and challenging the established clinical modalities when necessary. He often advocated experimental approaches over the guided principles without however, underestimating or ignoring the latter.

He focused much of his attention on the flow of Qi, blood, body fluids, as well as pathogens, claiming that it was the key to understanding and influencing bodily functions.

“Stagnation, whether present in the body or the organ systems must have visible manifestations of tension. Qi by its nature has no form but in the course of constraint the Qi gathers together. This gathering together makes it appear to possess a form even if in reality it has no material substance.”

葉天士 Ye Gui emphasized the unobstructed circulation of Qi, blood and body fluids and prioritized that over supplementing substances or draining pathogens.

He introduced unconventional approaches to the tongue, pulse, and inspection diagnosis, as well as created a number of key herbal formulas. The “genius doctor” as he is called today, also proposed new ways of treating pain, incapacity, emotional constriction, gynecological issues and pediatric disorders.

People in his community knew 葉天士 Ye Gui as the doctor who those with complex conditions go to.

葉天士 Ye Tianshi was, however, so busy in his clinical practice that he never found the time to write books. Most of his work was published after his death by his students and followers who gathered, organized and categorized his clinical cases and notes.

The infamous text Wen Re Lun (Discussion of Warm Diseases) was one of these such works and it focused on the four stages of progression of the feverish diseases: Wei (defensive phase), Qi (Qi phase), Ying (nutrient phase) and Xue (blood phase). The work is still highly regarded and often referenced by clinical doctors around the world today.

葉天士 Ye Gui’s dedication and wisdom are still echoing in the principles of Traditional Chinese Medicine today.  Upon his deathbed he humbly spoke to his son the following words:

” Not everyone is qualified to be a doctor. To become a practicing physician and save people’s lives, one can’t rely on innate intelligence alone; one also needs to study hard. Otherwise, it is difficult to guarantee that doctors will not jeopardize people’s lives. After I die, my descendants should not talk about medical science too casually.” 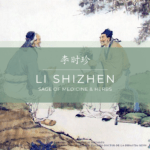